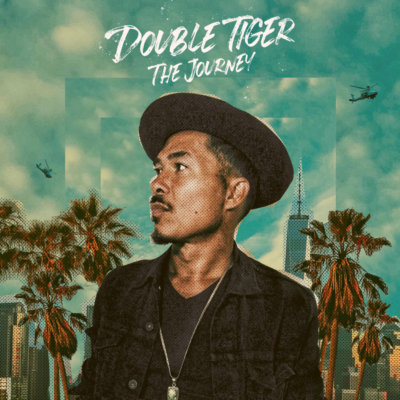 Double Tiger (the recording nom de plume for U.S. reggae stalwart Jay Spaker) continues to bring the heat as he unleashes more singles leading up to the release of his sophomore album The Journey, due out December 11 on Easy Star Records. After debuting “Drop Sound,” featuring Slightly Stoopid, Double Tiger returns with two more singles, highlighting the many styles he embodies. Head over to http://moremusic.at/TheJourney to pre-order or pre-save the record.

“Universal Love,” which came out last Friday, features guest vocals from Karim Israel of the Los Angeles-based reggae band Arise Roots, and is about humanity clinging to fear-based thinking; Double Tiger posits that if we had a universal love, seeing everyone as family, that would make a more beautiful world, which is certainly refreshing and uplifting message in these turbulent and uncertain times. Tattoo.com already boasted that “…with ‘Universal Love,’ Double Tiger generates sultry reggae tinted by tinges of rock, shimmering with plush emotional commitment, and charismatic vocals.”

“Rub A Dub Party,” featuring New Kingston’s guitarist/vocalist Stephen Suckarie, switches direction and brings an old-school house party vibe to The Journey. Its accompanying music video, which premiered at Reggaeville.com on Thursday, illustrates the song perfectly, with a lo-fi, thrown together style that exemplifies the instant fun created by throwing a big sound system into a house, adding plenty of liquor and weed smoke, and letting everybody get on down.  Paired with “Universal Love,” these two songs show two flip sides of Double Tiger’s musical personality, something that will be even more apparent when the full album drops. Spaker can put together romantic, hedonistic lovers rock with heavier, political-minded rockers tunes, and make it all work in balance.

It has been a tumultuous couple of years for Spaker, and the music on The Journey reflects this. He began writing and recording the record when John Brown’s Body (for which he was guitarist/vocalist) was winding down and going on hiatus. He had recently moved to Los Angeles after a lifetime of living in New York (both upstate and in the city). The sound of the tunes manage to capture this balance between his East coast roots and the West coast sound he was suddenly immersed in, with a good portion of the album heavily influenced by California life, the ocean, mountains, and the vibrant left coast culture. As Spaker puts it, “this album is a blend of the many styles of reggae that inspire me. The previous one was straight Rub A Dub focused. When I got to L.A., I was in a more open place and started exploring other aspects I had always loved – like lovers rock, rockers – but never really messed with in my own writing.”

The Journey showcases an artist hitting his stride, as Double Tiger creates one of the most exciting reggae albums of 2020. Double Tiger concludes, “I am very privileged to make music and believe in its power to heal and bring folks together. This last year has been powerfully transformative with my father’s passing, COVID, etc. so having this album finally out in the world is a blessing and I would like to dedicate this one to Pops.”