Tommy T was born and raised in Ethiopia’s capital city, Addis Ababa. “There was always music in our house,” Tommy recalls. “When I was five, my older brother Zelalem got an acoustic guitar from my father. By the time I was six I could pick up a guitar and play what my brothers were playing.”

Tommy had no intention of becoming a musician, but when his brother Henock moved to Washington DC, Tommy followed. “I looked up to him as a brother and a bass player. After he sent a copy of his first album to us in Ethiopia, I started playing acoustic guitar like a bass. When I came to the States, I got a real bass. There are over 200,000 Ethiopians in the DC metro area, so I was able to make a living playing in Ethiopian bands.”

Tommy completed a degree while playing in bands three or four nights a week. “I played in Ethiopian bands, and then started a reggae band called ADOLA which also backed many well known Ethiopian artists such as Aster Aweke and Gigi to name a few. I was also interested in other styles of music including R&B, hip-hop, and neo-soul. I worked with Wayna [Wondwossen, nominated for a best urban performance Grammy for her song “Lovin’ U (Music)”] and produced a couple of tracks on her Moments of Clarity album with my friend Abegasu Shiota. While collaborating on a project with guitarist Eran Tabib, he heard Gogol Bordello was looking for a bass player familiar with international grooves. In 2007, he joined that groundbreaking band and has been playing with them ever since.

In 2010, he released The Prester John Sessions on Easy Star, which went deeply into his Ethiopian musical roots, while bringing in elements of reggae, dub, jazz, and more. The record soldified his reputation as a forward thinking world musician. 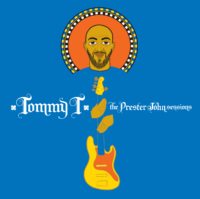