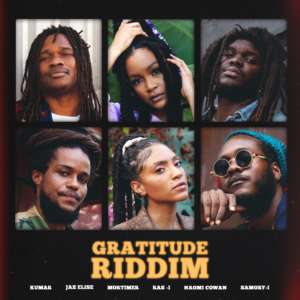 Producer Winta James has today released the full ‘Gratitude’ Riddim, which features versions from Jaz Elise, Samory I, Mortimer, Kumar Fyah, Naomi Cowan and Ras-I. The Riddim is a contemporary reggae one drop riddim, featuring traditional drum and bass from the legendary duo, Chris Meredith & Wilburn “Squidly” Cole. The songs, recorded during the COVID-19 pandemic, finds the artistes in a reflective mood, with their lyrics centering around themes of gratefulness, love, faith, and self-awareness.

Titular track ‘Gratitude’ and the prayerful ‘Love and Mercy’ by Jaz Elise and Samory I respectively, were the first versions out from the project. The now released remaining versions complete the story of gratefulness and love with Mortimer’s ‘Keep The Fire Lit’ a reminder to keep the passion alive in the face of life’s uncertainties. “Process and progress aren’t always the easiest. Neither is managing emotions while you’re at it.” Mortimer said. “We all have been tempted to fold but it is important that we calm our spirits as best as we can and power through the dark times and the heavy lows. This is the message behind “Keep That Fire Lit”; especially during these times…You can stop for a breath, but don’t you quit.”

Additionally, the project undertakes themes of self-actualization as Naomi Cowan’s version ‘The Voice’ speaks to the strengthening of one’s sense of self. In fact, it was Cowan’s first time working with Winta – something she had always wanted to do since the beginning of her career. “He played the riddim for me and we started to reason about the fact that young women and females like myself are so often subjected to people’s assumptions or expectations.” Naomi said. “One of my favorite quotes is ‘if I’m busy being you, who is available to be me?’…which is pretty much saying: I only have one time here on earth, so why would I try to be somebody else. That’s what this song is about. I know that people watch and compare me, whether to my parents or other female artists or they have their opinions. At the end of the day, I try to let my music speak for itself.”

Ras-I’s ‘Time Won’t Wait’ is a charge to the younger generation; it is a reminder that most if not all is achievable in life. “The song was written to help build confidence and to help shine light on the youths.” Ras-I said. “Telling them that through hard work, smart work and the Most High anything is achievable” Kumar Fyah’s ‘When The Smoke Clears’ takes on a slightly different turn as it explores the theme of personal tragedy while underscoring the importance of remaining faithful to Jah to provide clarity and peace.“This song is very personal to me. I lost my second son around the time I wrote it. It’s really how I felt.”

The ‘Gratitude Riddim’ is out NOW across all DSPs, distributed via Easy Stars Records.