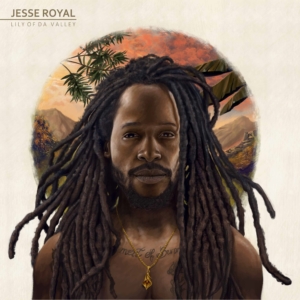 LILY OF DA VALLEY IS OUT NOW ON EASY STAR RECORDS

Recognized by Vogue and Vice TV  for his vital role in the current burgeoning Jamaican reggae scene,  Jesse Royal’s music carries an impactful message built to resonate with the millennial generation and beyond. Life as a globetrotter has opened up Royal’s worldview, which shines through in his lyrical stylings. The 28-year old Royal uses his music to push for positive changes, returning to the roots first planted by legends like Bob Marley, Peter Tosh, and Jacob Miller, in a pop culture climate that seems to praise and reward narcissistic, material-driven personalities.

The album title draws reference back to an old church hymn written in the late 1800s. The song, which Jesse learned from his grandmother’s time in church choir, has been a source of comfort and reflection for Jesse through hard times and serves as a personal reminder that “Christ came as an example, not as a deity,” encouraging a deeper overstanding of the concept of Christ beyond just the idolized “picture on the wall” to which He so often gets reduced. The album comes at a major turning point in Jesse’s life, celebrating new life in the form of his first child, while at the same time having to cope with the tough loss of his mother.

Recording for Lily of Da Valley  took place across many studios, from the Applehead Studio in Woodstock, NY, to the legendary Tuff Gong and Big Yard Studios in Kingston, Jamaica. The source material for the album arose organically, with Jesse keeping loads of hooks, melodies and lyrics on hand until he was ready to come with a full album’s worth of strong songs. This liberating approach of patience guarantees the new release has no forced filler. Studio assistance from the help of studio mastermind Llamar “Riff Raff” Brown, Kareem “Remus” Burrell, and Kurt White helped aid Jesse’s vision of pushing the genre forward while still paying respect to those who paved the road prior, showing the youth that “there is a space for them to be creative in music.”

Fans of Jesse Royal will recognize hit songs “Modern Day Judas” and herb-anthem “Finally,” making the album, along with recent singles “Always Be Around” and “Generation,” featuring Jo Mersa Marley. For those who haven’t had the chance to hear this inspiring voice, the 14-track album aims to deliver a refreshing conscious perspective that does not shy away from hot button issues, from religion to systemic oppression, starting with a heavy dose in album opener “400 Years.” Jesse balances the serious topics and tones by sprinkling in authentically-inspired love songs like “Real Love,” “Always Be Around,” and “Full Moon,” giving birth to what’s sure to be one of the most well rounded releases of the year.

Jesse Royal’s full-length debut marks a massive leap forward for an artist who has emerged as one of his generation’s most influential reggae artist from mixtapes and singles alone.  An album built to withstand the test of time, avoiding empty hype and providing heavy substance, Lily of Da Valley  will be available on Easy Star Records on October 6th, followed by a northwest tour. The album is available as a standalone, or in bundles here.