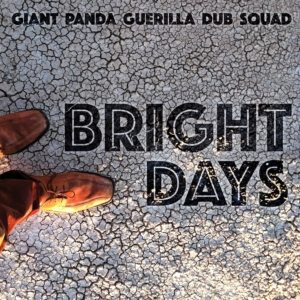 AMERICANA ALBUM SHOWS A DIFFERENT SIDE OF THE BAND


With the 2012 release of Country, Giant Panda Guerilla Dub Squad (GPGDS) proved their musical identity to be as undefinable as their name. The Rochester, NY-based quintet was known as a reggae-jam band, relentlessly touring on the back of their debut album Slow Down (2006). Six years later, GPGDS released the Americana-themed Country  which defied expectations for a reggae band’s sophomore release. “It is acoustic roots music at its finest…a major statement of purpose from a group who truly embody the spirit of their music” praised CBS Street Date. The band has since released two reggae albums, In These Times (2012), and Steady (2014), which debuted at #1 on the Billboard Reggae chart.

On May 18, GPGDS will release Bright Days  on Easy Star Records. Like Steady, the album was recorded at Rear Window Studio in Brookline, MA, and produced by Craig Welsch (10 Ft. Ganja Plant). Featuring nine original songs ranging from American Beauty-era Grateful Dead sounds (the title track) to African-inspired instrumentals (“Atabey”) to early Neil Young (“It Won’t Be Long”), Bright Days at times plays like a lost vinyl gem found at a yard sale.

Bright Days features guests G. Love on harmonica on “Humboldt County Gold,” and renowned mandolin player Eric Robertson (The Boston Boys) on “Atabey,” “Good To You,” and “War Machine.” Milt Reder, the owner of Rear Window Studio, plays guitar throughout the record. Reder has a long history in the business as a player, producer and songwriter, having worked with Susan Tedeschi, Bo Diddley, and others. Welsch suggested Reder participate in the Bright Days recording. The band was hesitant to take such a risk, until they witnessed him shredding George Harrison lines note for note with a Beatles cover band in a small Boston bar. Reder instantaneously provided a Zen atmosphere with his playing, guiding GPGDS to accomplish their goal of recording songs that had never been rehearsed or worked out previous to the studio session. “When Milt plugged in his guitar and began to play, we realized that the session was serious and special,” says singer-bassist James Searl.