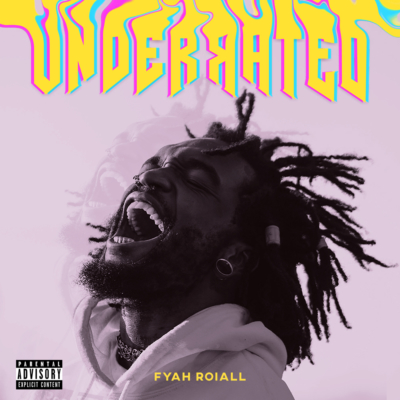 Fyah Roiall (pronounced “royal”) is one of Jamaica’s most exciting rappers at the forefront of the emerging “grimehall” sound (also sometimes referred to as “traphall”), a new forward-facing subgenre of Jamaican music that combines American trap, UK grime, and dancehall.  His recently released new single “Nobody,” out via Easy Star Records, coincides with the launch of the pre-order for his upcoming debut album UNDERRATED, due out on June 19th. You can pre-order the album at FyahRoiall.com

These are just some of the diverse inspirations and life experiences that have poured into UNDERRATED. “Making music is my way of curating my museum,” Says Roiall. Involved in every level of his music, from producer and engineer to creative director and even videographer, Roiall throws himself in from vision to execution. Though he is heavily involved in every aspect of what he puts out, he also gets assistance from producers Covsnsel!, SOSDynamikz (Koffee), Space Age Rasta on these tracks.

The album’s title is meant to showcase genuine talent over contrived creativity. Roiall explains, “’Underrated’ is usually an ugly word; no one wants to be considered that, but being overrated isn’t good at all, either. Being ‘underrated’ is the real deal. My aim is to pull the focus in the direction of the underrated, because I think that is where the real talent is; everything else is over saturated.”

Fyah Roiall is thrilled to release his full length album and hopes his listeners understand that “Myself and my music are all one in the same. I am my music, my music is me.  If you truly know one, then you know the other, it’s that deep.”

Roiall is in a unique position to bring the legacy of Hip Hop and Bass Music back to the tiny island where it all began decades ago. He is more in touch with the current global market than his Dancehall-centric Jamaican contemporaries, and he is more authentic than the foreign producers and artists that capitalize from the trendiness of Jamaican-derived genres. Jamaica may not be comfortable with his look or creative freedom yet, but, with this new project, UNDERRATED, it won’t be long before the entire world realizes how underrated Fyah Roiall is. It also might be the last time you associate that word negatively.

.@Gentlemansdub released "Out Of This World," from Lost In Space as a single one year ago today. This release included an exclusive remix of Groove Armada’s “Superstylin’” & a remix of the title track from the highly celebrated General Roots.Listen at https://t.co/EiIs1eHMlp https://t.co/6NbCEOBPOt

2
Our CEO, Eric Smith, sat down with the @PruCenter GRAMMY Museum Experience for a Mini-Masterclass on what it takes to be successful in the music industry today. Watch the full video at https://t.co/yBXNyRIbqM#EasyStarRecords #GRAMMYMuseumEXP https://t.co/1GnKsHorfE