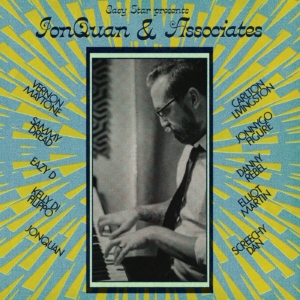 DJ, singer, songwriter, keyboardist, and producer JonQuan is proud to announce the release of his new album EASY STAR PRESENTS JONQUAN & ASSOCIATES. Working closely with two-time GRAMMY winner Victor Rice (Easy Star All-Stars, Bixiga 70, Ticklah), JonQuan has fashioned an album’s worth of brand-new tunes that evoke the majesty of the golden age of reggae, while still feeling absolutely up to the minute in content and style. Accompanying each JonQuan-produced track on the album are dub versions mixed by Rice. Easy Star Presents JonQuan & Associates is available now, and available here.

JonQuan has been the frontman, songwriter, and keyboard player for Buddha Council, based out of Virginia Beach, for the past few years. His infatuation with Jamaican music began from vinyl collecting and being a DJ. From ska to rocksteady, reggae to dub, JonQuan’s production style and keyboard shuffle conjure classic Jamaican styles. His new album was born during lockdown, as he explains, “I was inspired over the pandemic to create my own original riddims to cure the boredom and woes of being off stage and locked down.” He continues, “Once I got into the studio and released creative energy, it became a little easier to deal with the bummer that was this moment in time. Patience is a virtue. Do the right thing. Be a good human being.”

Once JonQuan had an album’s worth of riddims, he set about finding great vocalists and musicians to collaborate with. “This is my first project where I produced the riddims myself. I wanted to leave the door open for the players of all other instruments for maximum creative input, but within certain parameters. I personally chose who I wanted to play what instrument on what song. I’m most accustomed to live writing with a band while feeling for a groove.” With the riddims finished, JonQuan enlisted Sammy Dread, Vernon Maytone, JonnyGo Figure, Kelly Di Filipo (of The Loving Paupers), among others, to complete the album. Victor Rice mixed the tracks at his Studio Copan, in São Paulo, Brazil. In addition, Rice gave each song the dub treatment that’s included on the album.

After JonQuan had the record finished, Victor Rice made the connection to Easy Star Records, his label for the past few years. For the team at Easy Star, they felt like they were reconnecting with their own origins as a label, as their very first release was a similar project, EASY STAR VOL. ONE, which paired their own foundation-inspired original riddims with vocals from both Jamaican veterans and New York City-based newcomers. A generation has passed since that project, and Easy Star Records has become a major player in the genre, and pivotal in the burgeoning U.S. reggae scene. Since evolving into a major force, it was refreshing for the label to work with another upstart project that had so much energy and creativity that lined up with their ethos.