Even if you haven’t heard his name, you’ve probably heard Ticklah’s (a.k.a. Victor Axelrod’s) contributions to dozens of familiar projects. As a co-producer (and the keyboardist) of Dub Side of the Moon, he helped craft one of the best selling reggae albums of the last twenty years. He was a founding member of the Easy Star All-Stars, playing on the very first sessions the band ever did in the earliest days of Easy Star’s existence. He contributed keys to Radiodread, Easy Star Volume One, Easy Star Volume Two: Dancehall Culture, and other Easy Star releases.

As a key member of the Afrobeat collective Antibalas, and as an original member of Sharon Jones and the Dap-Kings, Axelrod is known for nailing grooves and then dancing around them in jaw-dropping capacity. His session work with Mark Ronson has put him on tracks by Lily Allen, Robbie Williams, and Amy Winehouse (including the hit “Rehab”).

Ticklah Vs. Axelrod, his first album on Easy Star, came out in September 2007 and features guest vocals by Mikey General, Rob Symeonn, Tamar-kali, Vinia Mojica, Mayra Vega and more. It has become one of the most celebrated Easy Star releases and includes the song “Nine Years,” which was used on the second episode of Breaking Bad as well as the series soundtrack.

In 2016, Ticklah produced the debut full-length by The Frightnrs, which became one of the hippest releases of the year. 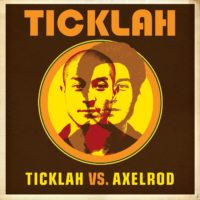